Keynote speaker on June 4 at the Canada Green Building Conference in Toronto was Matt Noblett of Behnisch Architekten. The German design firm is based in Stuttgart and had its beginnings in the Post World War II era. Its founder helped design... 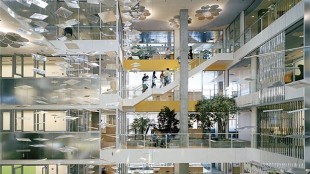 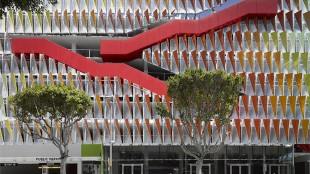 Keynote speaker on June 4 at the Canada Green Building Conference in Toronto was Matt Noblett of Behnisch Architekten. The German design firm is based in Stuttgart and had its beginnings in the Post World War II era. Its founder helped design the 1972 Olympic Stadium in Munich (with Frei Otto), and new Parliament buildings in Bonn — just before East and West Germany were unified and the government moved to Berlin. Gunther Behnisch’s son Stefan now runs the firm. Noblett is from the company’s only North American office in Boston.

Noblett  presented projects from both Europe and the U.S., but what was striking was their holistic approach to green design and creative features that they had introduced as early as the 1990s.

He began by saying that sustainable design has to grow broader in its application, going beyond individual buildings, to informing urban design and infrastructure. But, buildings are the first things we associate with cities, so they’re important both culturally and in how people perceive space and move around in it. He said that “material responsibility” is key to their sustainable design, i.e. the reuse of valuable materials, as well as how they incorporate nature, and use daylight, water and energy.

The first building Noblett showed was from 1993 in the Netherlands. It was a sprawling institutional building that incorporates multiple large roofed gardens between the built blocks.

Then he showed the Genzyme pharmaceutical building near the Charles River in Cambridge, Massachusetts, dating from 2003. In this project the design integrated the garden areas vertically at different levels off a 13-storey atrium. He said the when they had been given the competition program, they had been “aghast” with the deep floorplate coverage, which would not be allowed in Germany. So they “punched a big hole” into the tower with an atrium, and then made the tower higher to compensate for the loss of floor space.

To direct sunlight down into the atrium they mounted heliostats on the roof, and installed a set of prismatic chandeliers. The chandeliers hang down into the atrium, playfully reflecting the sunlight off their surfaces. The ground plane of the Genzyme building is completely open to the public. Interestingly, Noblett said, the owners decided to pay for all the special green features by allocating the marketing budget to them, believing – rightfully as it turned out – that being so sustainable, the building would market itself.

The Cambridge building and others he showed are naturally ventilated, using the atrium as a giant air return. Several of his buildings had double facades containing pumped fresh air and operable windows on the inner wall. He also showed a building in Hanover that uses a geo-exchange system for radiant cooling, and a law school in Baltimore that was built at the perimeter around a courtyard, serving as a shield against a busy expressway nearby (the expressway was built in the 1950s on top of a river!). He showed buildings with sunshades over the entire facade, with water features for masking expressway noise, and buildings with completely exposed concrete structures to provide thermal mass and reduce temperature swings. He showed a building with alternating upper and lower glazing to provide both daylight and solid coverage, and buildings entirely lit by LED lights.

One of the most colourful and appealing projects was a simple parking garage in Santa Monica, California. A bright red ramp rises on the diagonal across the facade, which is also punctuated throughout with bright red metal panels. The panels have reflective material on the inside and are folded out to reflect sunlight inside the garage. Ironically, Noblett said, despite this daylighting, the building code requires that artificial lighting be left on permanently inside the garage.

What was refreshing in all of Noblett’s presentation, was the reminder that green building design does not have to be formulaic (as some believe is the trend). Designers who start from fundamentals can find innovative and aesthetically pleasing ways to help building occupants to live more symbiotically with nature.