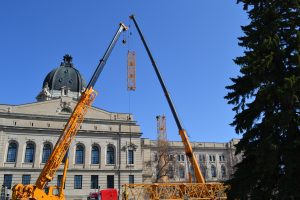 The 102-year old structure had deteriorated due to weather and poor drainage, leaving sections of the limestone base discoloured. Some of the stone sections were separating from the building.

Approximately 17 tonnes of new limestone were imported 600 kilometres from Tyndall, Manitoba for the restoration.  On the copper dome new copper sections were added, but some of the original material was retained. The dome is topped by a cupola and four way lantern.

A temporary structure was built around the dome while the work proceeded, partly for worker protection but also to maintain a temperature that would allow for the new mortar to cure.

The legislature cost $1.7 million to build in 1912, which is estimated to be the equivalent of $808 million today.