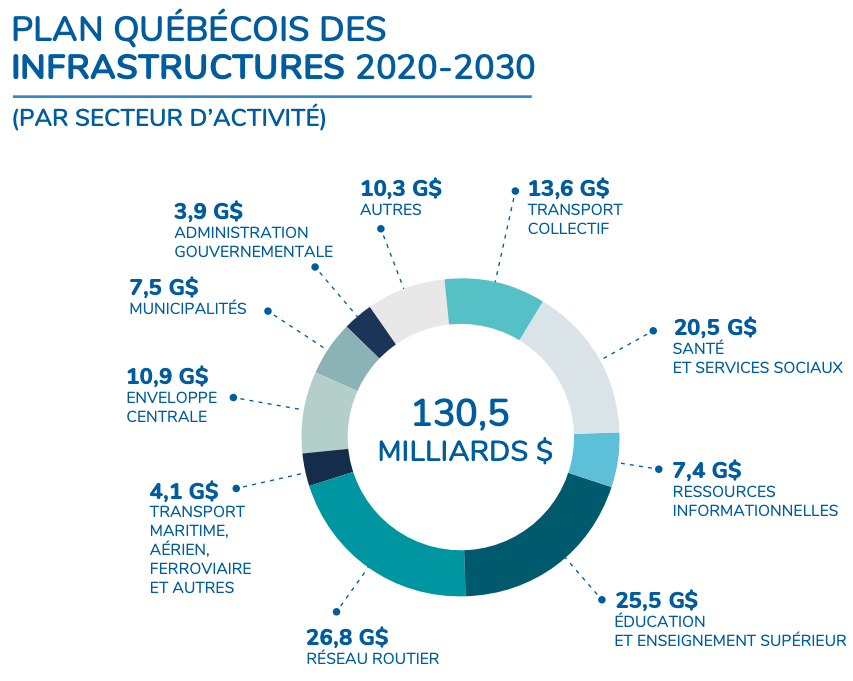 Yesterday, Quebec’s provincial government presented its second Quebec Infrastructure Plan (QIP), representing a record $130.5-billion investment over the next 10 years, up $15.1 billion over the first QIP.

Looking ahead from 2020 through 2030, the government outlined four key priorities: education, public transit, health and culture.

The first of these, education, will represent 27.2% of the new QIP funding, with $5.9 billion in additional investments bringing those in the sector to nearly $19.2 billion over the next decade, 71% of which will reportedly be dedicated to renovating and maintaining schools. The QIP will primarily focus on (b) setting up new spaces in primary and secondary schools and (b) expanding secondary schools, particularly in the Montreal area.

As for public transit, the plan adds $3.3 billion for new projects in the Montreal, Montérégie, Laval, Capitale‑Nationale and Outaouais regions. In Montreal, for example, the metro’s blue line will be extended and new Azur cars will be acquired to replace older models, while dedicated bus lanes and bypass shoulders will be added to the road network.

The QIP earmarks $2.9 billion for health and social services establishments, bringing investments in the sector up to $20.5 billion. The government proposes modernizing several hospitals, including Hôpital de Sept‑Îles and Hôpital Charles‑Le Moyne, and overhauling residential and long-term care centres for seniors and adults with special needs.

Finally, the plan includes $394 million for cultural infrastructure development, including the acquisition, restoration and redevelopment of heritage buildings across the province, to be used as ‘hubs of cultural outreach, creation and mediation.’

“Recent fluctuations in the global economy have confirmed the time is right to invest in our infrastructure,” says Christian Dubé, provincial minister responsible for government administration and chair of the treasure board. “In addition to helping to maintain a strong economy, the investments in the 2020‑2030 QIP are intended to combat climate change while addressing the obsolescence of our assets.”