Artist’s rendering of ABB’s new headquarters in the Montreal Technoparc.

Power and automation company ABB is building a $70 million new headquarters, research and manufacturing complex in Montreal. The 300,000-sq.ft. facility is under construction in the Montréal Technoparc in Saint-Laurent. It will bring together under one roof 700 staff who are currently dispersed in six locations around Montreal. The contractor-developer is Broccolini with NKF Davencore. Dupras Ledoux are mechanical-electrical engineers, ARCHITECTURE 49 and Lemay are architects. 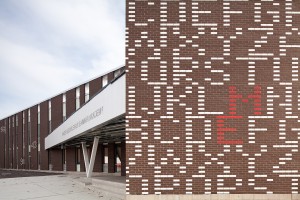 MasonryWorx, the Ontario association for the brick, block and stone industry, gave awards to five buildings this month. Blackwell was the structural engineer for Kohn Shnier Architects on the Fraser Mustard Academy located in the Toronto neighbourhood of Thorncliffe Park. The masonry exterior of the linear building includes coloured brick letters representing schoolwork. Entuitive was the structural engineer with Perkins + Will as Architects for the Cornell Community Centre and Library, a 129,000-sq.ft. centre that includes a living wall. The three other MasonryWorx winners were private residences. 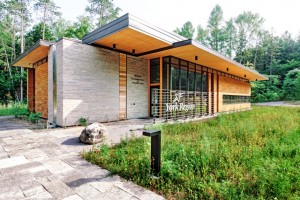 DIALOG are the architects, structural, mechanical and electrical engineers for the Fisch Forest Stewardship and Education Centre in Stouffville, York Region, north of Toronto. The centre is the first building in Ontario to target Full Petal Living Building Challenge certification — the most rigorous international standard for sustainable buildings. The single-storey 4,000-sq.ft. centre incorporates teaching and corporate spaces. It is built almost entirely of sustainably harvested or recycled wood, includes solar panels and captures rainwater. It is located in the restored York Regional Forest, Hollidge Tract, one of the most successful forest generation projects in the world.

HDR has been contracted to assist the City of Kingston with a Municipal Class Environmental Assessment study for two stretches of highwéay in the city’s growing east end. The study will consider solutions to improve traffic flow, and future needs of pedestrians and cyclists on Highway 15 from the 401 to Highway 2, and Highway 2 from the La Salle Causeway to Princess Mary Avenue.

SNC-Lavalin is part of a consortium, Linéov Group, which has been hired by the Sociéte du Grand Paris (SGP) to provide project management services on the construction and operations the transportation network’s Line 18.

SNC-Lavalin has also been awarded a contract by SaskPower for the Island Falls Powerhouse Concrete Rehabilitation project in Saskatchewan. SNC-Lavalin will be the owner’s engineer on the $45-million project and will prepare drawings and specifications for the powerhouse, Main Dam and A-Dam. It will also supervise construction, which will take place between 2015 and 2019.

CH2M has been contracted as program management consultants for the Metrolinx Regional Express (RER) program. The project is part of a massive transformation and network electrification of the GO rail network in the Greater Toronto and Hamilton area. CH2M is working with subconsultants Turner & Townsend, Comtech and Deloitte.