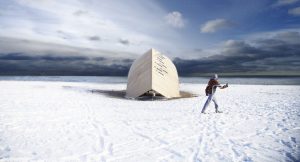 The 2016 Ontario Wood WORKS! Design Award winners were announced on November 15, recognizing  10 projects, along with their architects and structural engineers.

Besides the large projects such as community centres, schools and an Orthodox church, two unique  projects won awards: one a mobile pop-up store, and the other a canoe-inspired pavilion designed by a team from the Ontario College of Art and Design. As well three awards were given to individuals.

Marianne Berube, executive director of the Ontario Wood WORKS! program noted that wood use is increasing around the world and that prefabrication is now allowing it to “outpace even its own relatively quick construction speed.”

Following are the winning projects in their categories:

Environmental:  Upper Thames River Conservation Authority – Community Conservation Centre, London. Randy Wilson  Architect and Hastings & Aziz engineers. A 40,000-sq.ft. multi-purpose building that preserves the existing environment and responds to Fanshawe Park Lake to its north, defined as an entry point for an urban river and flood control system. The building is a post-disaster facility and has an underground wet lab and flood control room.

Residential:  Bridgehouse, Port Sydney. LLAMA Architeture and Blackwell engineers. A “horizontal line to counterpoint its setting atop a ravine,” the 2,400-sq.ft. house has a glue-laminated Douglas Fir span of 60 feet across a ravine, allowing a structure-free frontage to the lake. 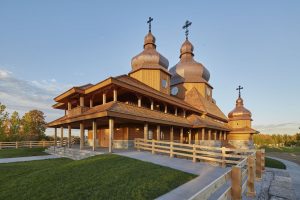 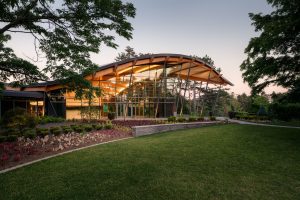 Architects, WSP engineers.  A compelling new entry point into the revitalized David Braley and Nancy Gordon Rock Garden, the 9,075-sq.ft. visitor centre main spaces have a heavy timber wood frame that accommodates the complex curvilinear shapes of the design. Wood columns and beams also suited the transparent, pavilion-like building in the middle of its natural surroundings.

Northern Ontario: Woodland Public School, Near North District School Board, North Bay. Mitchell Architects and WSP Canada engineers. Situated next to a 17-acre forest, the school design draws inspiration from this woodland to create a warm and welcoming environment. It features heavy timber roof construction in its core areas like the lobby, gymnasium and main stairway, and heavy glue-lam columns as a façade element in the library.

Jury’s Choice: La Ruche: Collaborative and Experiential Lab, Ottawa. La Cité, project lead and design.  A unique pop-up space for education, collaboration, promotion and exhibitions, the structure is constructed of CLT as a key material, which makes it durable to withstand multiple trips around the region, and gives it a solid shell that is easily fastened to the trailer base for transport.

Jury’s Choice: Chippewas of Nawash Unceded First Nation, New Elementary School, Cape Croker. MMMC Architects, and Blackwell engineers. Located on the western shores of Georgian Bay, the building’s form and structure were developed with the participation of the First Nation and with respect for their cultural sensitivities and the land. The main structure is a heavy timber hybrid providing  a large ceremonial space. Wooden screens inspired by indigenous motifs are used to control noise and hide mechanical systems from public view.

Ontario Wood Award: Winter Station 2016 Steam Canoe, Toronto. OCAD Design Team (architect). The project is a pavilion shell  inspired by a canoe. The structure consists of spruce and oak laminated together by the use of Grip Metal, a type of metal Velcro fastening system by NUCAP industries that bonds the material together with micro hooks.