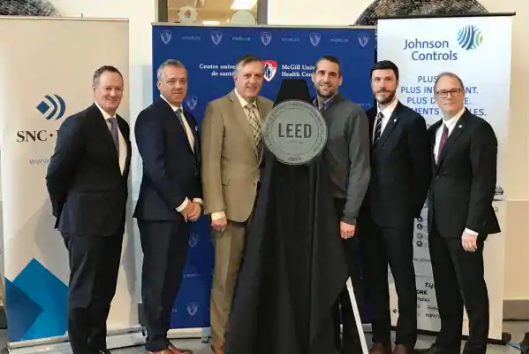 The Canada Green Building Council (CaGBC) has awarded the certification to the McGill Healthcare Infrastructure Group (MHIG), comprising SNC-Lavalin and Innisfree Canada, which designed, built and financed the complex as part of a public-private partnership (P3) and will operate it until 2044. The site opened in 2015 and obtained its first LEED Gold certification for new construction (NC) in 2016. This second certification is for existing buildings (EBs).

“MHIG is proud to have obtained LEED Gold EB certification,” says Jean-Pierre Dumont, president of MHIG. “Thanks to the efforts of an accomplished team from Johnson Controls and SNC-Lavalin, we have succeeded in building a hospital complex that ranks among the greenest in North America.”

The following are some the hospital’s measures that save energy and improve indoor air quality (IAQ):

MHIG reports these and other energy-efficient initiatives have yielded savings of approximately $2.5 million per year.

“Through the integration of ‘smart’ technologies, MUHC’s Glen site is future-ready,” says Stephane Couture, regional director for Johnson Controls, which contributed 40% of the hospital’s building technology, including HVAC systems and LED lighting fixtures. “Green initiatives like this set the standard for health-care facilities.”

“Building on this achievement, a newly created sustainable development committee pledges to spearhead more initiatives aimed at improving the sustainability of our operations and services for generations to come,” says Pierre-Marc Legris, director of technical services for MUHC.