“Achieving total completion within seven months of substantial completion on a project of this scope speaks volumes about the collaboration and respect exhibited by all partners.” 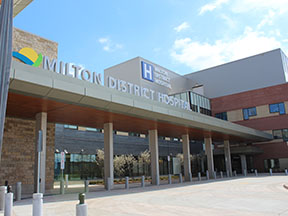 PCL Constructors Canada Inc. (Toronto) has announced the completion of the Milton District Hospital expansion project, signifying that all construction activities have been completed.

“The Milton District Hospital expansion project is a case study for design-build excellence,” says PCL Toronto district manager Kelly Wallace. “Achieving total completion within seven months of substantial completion on a project of this scope speaks volumes about the collaboration and respect exhibited by all partners, which was a critical success factor in achieving this tremendous outcome for the people of Milton.”

The project achieved substantial completion in April 2017 and Halton Healthcare began providing patient care in the new space on October 1, 2017.

Ensuring the existing Milton District Hospital could continue to serve the community during construction was key to the success of the expansion, which was built to meet the increasing care needs of one of Canada’s fastest growing communities, and to accommodate new technology.

“Reaching final completion demonstrates another significant milestone for the Milton District Hospital project. Plenary remains incredibly proud of the collaborative working relationship we have with all the project partners, and we look forward to participating in the ongoing success of this facility,” said Angela Clayton, Plenary Group’s head, Buildings Division.