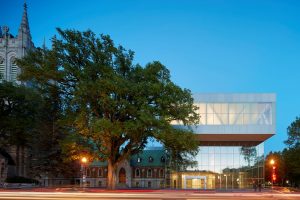 Quebec City’s Musée de Beaux Arts (Museum of Fine Arts) opened a major addition at the end of June. The Pierre Lassonde pavilion is a 14,900-square metres volume that serves as a gateway to the museum’s three existing buildings and doubles the exhibition space.
Located off the Grande Allée traffic artery, the pavilion consists of three large glass rectangular cascading volumes. On one side it has a curtain wall facade 26.5 metres wide and 12.5 metres high below a cantilevered roof. The interior features a concrete gable wall that was cast in a single block horizontally and then raised, and a monumental staircase that rises three storeys.
Behind the pavilion in National Battlefields Park are the museum’s three existing buildings, including one that is a former prison built in 1867. The new pavilion is connected to the rest of the complex by a 130-mete underground corridor known as the Riopelle Passageway.
Principal architects were OMA of New York with Provencher Roy of Montreal. Structural engineering was by SNC-Lavalin, mechanical-electrical engineers were Bouthillette Parizeau /Teknika HBA. FRONT designed the façade and the general contractor was EBC.
The museum shows Quebec art since the 17th century.