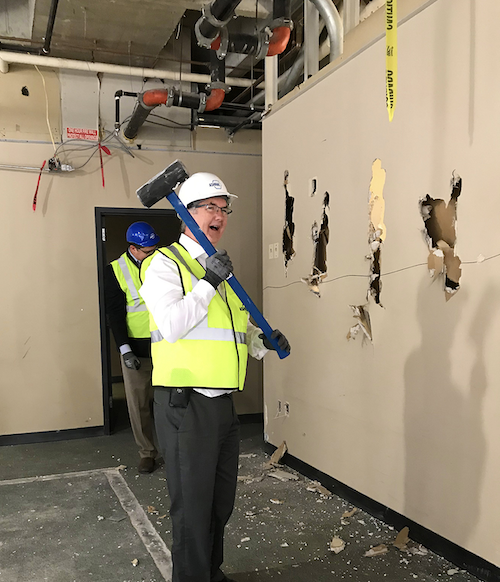 Darryl K. Boyce got to help dismantle the walls of the building that will soon serve as ASHRAE’s new HQ. Photo courtesy ASHRAE.

Darryl K. Boyce, based in Kemptville, Ont., has had the fortune to lead ASHRAE as president during a particularly eventful term. No, we’re not referring to the COVID-19 pandemic, which forced him to self-isolate after a trip home from the U.S. and just before this interview. Rather, ASHRAE is in the midst of renovating its new 66,000-sf headquarters (HQ) at Technology Park in Peachtree Corners, Ga., with the goal of using modern designs and systems to achieve net-zero energy performance and plans to move in shortly after Boyce’s term ends this summer.

How is the project coming along?

So far, it has continued on schedule, taking all necessary precautions, including sanitizing and social distancing. It’s a week-to-week situation, but we expect substantial completion by August or September and to move in October.

How did you choose this location?

When we sold our previous 35,000-sf building in Atlanta to Children’s Healthcare of Atlanta (CHOA) in 2018, the leasing market was very expensive, so we felt it was best to buy another building and renovate it. This one was built in the 1970s and had been vacant for the past couple of years, as its previous tenant had been bought up by another company.

What shape was it in?

A physical assessment showed the building’s structure was solid, but many of its systems were at their end of life. This made it perfect for our goals of demonstrating modern improvements in indoor air quality (IAQ), employee comfort and net-zero energy consumption. We hired a design team, then sought the money and equipment to meet the design criteria.

Also, Cisco has donated major information technology (IT) components to support building automation systems (BASs) in the type of next-generation network they foresee as “the fourth utility.”

What have been the biggest challenges?

One of the first challenges was the amount of hazardous substances in the ceiling spaces, which we had to dismantle and get rid of. Also, the radiant panels weren’t something Atlanta’s plumbers had installed before; these systems use piping that requires hiring a more expensive fitting installer.

We’ve learned that while it’s cost-effective to repurpose an existing building rather than construct a new one, the devil is in the details—particularly when you open up the walls and get a surprise!

What’s next in the process?

We’re still working on the building envelope. It had old, double-pane, floor-to-ceiling glazing that was not efficient. To achieve our intended energy performance, we needed to reduce the window-to-wall ratio by 40%. So, we are replacing the walls, but we also need to balance energy consumption reduction with enough natural light to ensure a comfortable indoor environment.

Once our 114 staff from Atlanta move in, we will monitor and analyze the performance of the building’s equipment. We’ll use tools to see how best to use the BASs effectively to ensure comfort without wasting energy.

We will also share those lessons with the industry. The Building Owners and Managers Association (BOMA), for example, plans to document our process as a case study.