A blizzard hit Oshawa east of Toronto on June 13, with temperatures around minus 27 celsius. The unseasonable weather was created inside a brand new climatic wind tunnel being officially opened at the University of Ontario Institute of... 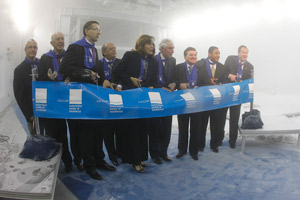 Politicians and university officials in the wind tunnel at the official opening of the UIOT General Motors of Canada Automotive Centre of Excellence. Federal Minister of Finance Jim Flaherty is third from the right.

A blizzard hit Oshawa east of Toronto on June 13, with temperatures around minus 27 celsius. The unseasonable weather was created inside a brand new climatic wind tunnel being officially opened at the University of Ontario Institute of Technology (UIOT).

The five-storey tunnel is inside the Core Research Facility at the Automotive Centre of Excellence at UOIT. The tunnel is large enough to test all kinds of equipment, not just automobiles — equipment such as wind turbines, aircraft and aerospace components.

Within the tunnel, equipment and products can be subjected to temperatures of between minus 40 C to plus 60 C, as well as wind speeds over 240 kilometres an hour, and relative humidity ranges from 5% to 95%. The tunnel also has a solar array to replicate the effects of the sun from dawn to sunset, and ultraviolet effects that are equivalent to those at noon on the equator.

A small and a large wind tunnel are part of the facility. They incorporate a road simulator and a four-poster shaker to test for motion, as well as a multi-axial simulation table to test products for structural durability and vibration in three dimensions.

Located beside the Core Research Facility is an adjacent Integrated Research and Training Facility. It has five floors of space dedicated to offices and industrial labs.

UOIT says that the facility is “the first commercial research, development and innovation centre of its kind in Canada and in many respects the world. This is where the next generation of electric and alternative fuel vehicles, green energy technology and products we haven’t even thought of yet will be discovered, tested and validated.”

The centre is owned by the university but will operate independently, providing amenities for both private corporations and the university’s academic researchers.