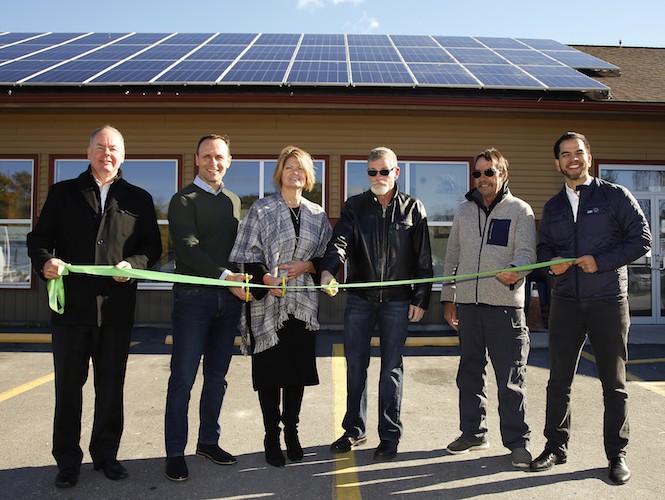 The Hiawatha First Nation, located on the north shore of Rice Lake about 20km from Peterborough, Ont., is celebrating a new solar installation on the community’s Old Railroad Stop, a local gathering place.

The Old Railroad Stop 22kW solar installation will generate enough carbon-free energy to meet approximately 14% of the building’s overall electricity requirements annually. In addition to providing environmental benefits, the solar project is expected to save the Hiawatha First Nation community approximately $154,000 in energy costs over the next 25 years.

Built on the location of an old train station and grocery store dating back to the 1850s, the multi-use facility sits in the heart of the community. It is a gathering place that houses a convenience store, gift shop, gas bar, restaurant and museum. Many members of the community worked their first jobs at The Old Railroad Stop, particularly during the busy summer months.

The installation was made possible through support from BASF and Bullfrog Power.

“It is vital to do all that we can to protect Mother Earth and the air that surrounds her, and using solar energy is just one way to shift away from carbon-based fuels that negatively impact our world,” said Hiawatha’s Chief Laurie Carr in a media release.

“We partnered with BASF and Bullfrog Power to do our part in switching to a renewable energy source. The use of solar energy at our Old Railroad Stop will not only reduce the emissions from carbon-based fuels but will also provide significant savings on energy costs. This is our first step in using renewable energy as a First Nation and the use of renewable energy sources will be included in all our future planning.”

BASF Canada has ties to the Hiawatha First Nation through an employee, Kirk Edwards, who also serves a Councilor for the Hiawatha community.

Hiawatha First Nation has a citizenship of approximately 650 people and a land base of 2,145 acres. The people of Hiawatha are Citizens of the Michi Saagiig Nation and have resided in their Traditional Territory of Treaty 20 and Williams Treaties area for thousands of years. The Community of Hiawatha First Nation, was established as a reserve in 1828, then called “Rice Lake Reserve.”