As Haiti continues to struggle with various crises in the aftermath of last January's earthquake, four structural engineering firms from Canada are joining forces to help. 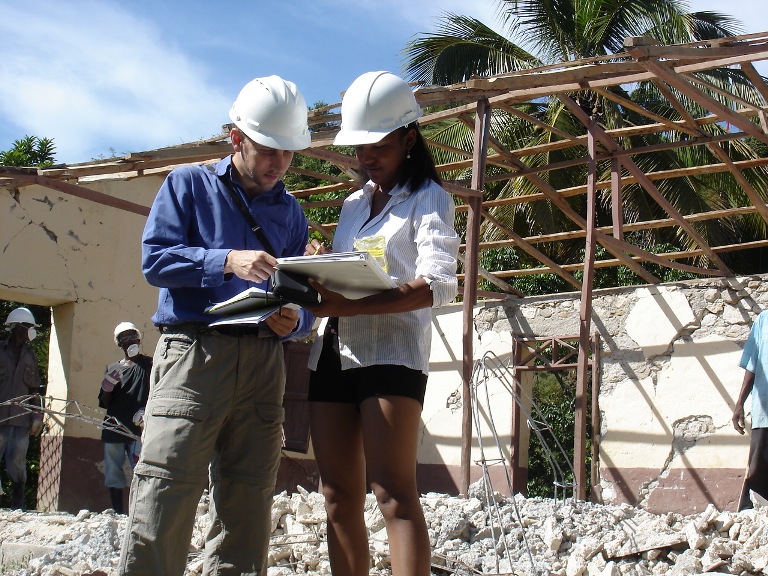 Shane Copp of Read Jones Christoffersen (left) talking to the contractor's architect at St. Joseph School in Embouchure, Haiti. The site has no roads or electricity and is a two hour hike from the nearest road.

As Haiti continues to struggle with various crises in the aftermath of last January’s earthquake, four structural engineering firms from Canada are joining forces to help.

Quinn Dressell and Associates, Halsall Associates and Blackwell Bowick Partnership, all headquartered in Toronto, as well as Read Jones Christoffersen’s Toronto office, responded to a call by Finn Church Aid (FCA) to rebuild schools in areas of Haiti that were hardest hit.

Liz Oldershaw, an engineer with Halsall Associates in Toronto has a friend who works with the FCA. When she heard about the school rebuilding project and the extent of the work involved, she decided to ask her company to support the program. Then one of the Halsall principals contacted people he knew in the other firms, and the whole combined effort began.

“As individual firms, we had each decided to help with the rebuilding efforts. But we realized that we could have a much bigger impact if we teamed together,” says Oldershaw.

The first person selected to go to Haiti was Shane Copp, P.Eng. of Read Jones Christoffersen, who is bilingual. He was quickly deployed to go to the country to help with construction, to build local teams and to ensure that the schools are hurricane and earthquake resistant.

Copp explains the design challenge: “Some of the schools are being built in remote areas that are very difficult to access. Supplies have to be carried over mountains and other difficult terrain by donkeys.

Reaching the most vulnerable people is one of the FCA’s mandates, so being able to build lightweight and safe structures is key.  A school being rebuilt in Embouchure, for example, is on a site with no electricity and a two-hour hike from the nearest road.

Two schools will be ready early in 2011, and there are plans to build 10 more as a joint effort between the Canadian engineering teams, together with local contractors and communities.

The four Canadian companies are splitting the work of providing engineering design support.  All the work is being done on a pro bono basis and Halsall, for one, has committed to helping out for a year.