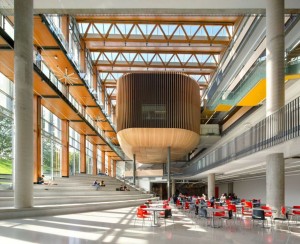 Two B.C. engineers — a structural engineer and a fire protection engineer — won special recognition at the 2016 Wood Design Awards. The awards were presented in front of an audience of 350 people by Wood WORKS! BC at the Vancouver Convention Centre West on February 29.
The Wood Champion Award was presented to Vancouver-based Andrew Harmsworth of GHL Consultants. A longtime specialist in fire engineering, Harmsworth was recognized for his leadership in tall wood construction, and for his contribution to the establishment of wood-friendly building code changes.
Thomas Leung of Thomas Leung Structural Engineering of Vancouver was the 2016 Engineer Award recipient. He is known as a leader in mid-rise construction in B.C. and was honoured for his firm’s designs in six-storey light-frame wood construction. His projects include MEWS at the University of B.C., Emerald Heights in Surrey and Dominion in New Westminster.
The Architect Award went ot Patrick Cotter of ZGF Cotter Architects.
For building awards, there were 103 nominations in 13 categories. The entries included submissions from England, Germany, Japan, China, South Korea and Taiwan for the new International Wood Design category.
Among the winners, were the following.
C.C. Yao of Read Jones Christoffersen won a Jury’s Choice award for the UBC Student Union Building in Vancouver.
Gerald Epp of StructureCraft Builders won an award in International Wood Design for the Tsingtao Pearl Visitor Centre in Qingdao, Shandong Province, China. The 28,000 sq.ft. centre has a unique form and was built in “parcels” so that mass wood elements could be assembled according to computer generated shop drawings by domestic workers, while complex components and connections were designed and fabricated in Canada. 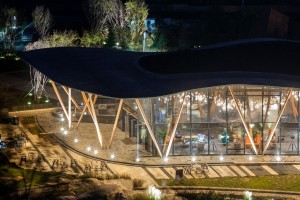 Stantec Architecture won an award for Canada House in London, England in the Interior Beauty Design category.
A Special Recognition Award went to the University of British Columbia for its many iconic buildings that feature wood products. The award was given by Wood WORKS! BC and the Hon. Steve Thomson, Minister of Forests, Lands and Natural Resource Operations.
The Wood Innovation Award went to the Philip J. Currie Dinosaur Museum in Wembley, Alberta, while the Environmental Performance Award went to the Alta Lake Passive House in Whistler, BC.
The panel of four judges included Mark Porter, P.Eng. of Associated Engineering, as well as architects Ian Niamath and Joseph Mayo, and Peter Wood of Weyerhaeuser.
For the full list of winners, including a link to photographs, click here.