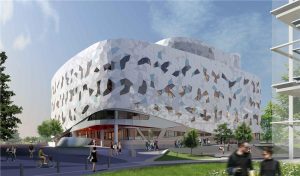 Bergeron Centre for Engineering Excellence at York University, artist’s rendering. The project won one of the CanBIM Awards presented in Toronto on October 5 and was a tour venue for the CanBIM conference.

The Canada BIM Council held its 2nd Technology Built Innovation event in Toronto on October 5 and 6. The first day was devoted to tours of two BIM-designed buildings at York University in the northwest of the city: the university’s subway station still under construction, and the recently completed  Bergeron Centre for Engineering Excellence, with its unusual patterned façade.

The second day saw a roster of speakers representing everyone from software manufacturers, to architects (Adamson Associates, to engineers (IBI and Arup). Naturally the speakers were all advocates and practitioners of the building information modelling (BIM) approach. BIM has been defined as “a digital representation of physical and functional characteristics of a facility.” The BIM model of a building ideally incorporates and integrates multi-disciplinary design layers in three dimensions as well as related functional and material information. The model can be used for collaborating in the building’s design and for operating the facility throughout its lifecycle.

The more practical presentations at the conference covered topics such as “Integrating BIM with Building Energy Modelling,” “Mobile BIM Technology,” “V-Ray for Revit,” and “BIM MEP Design to Fabrication and Back Again.”

First, however, attendees heard a high level visionary keynote address by Gord Kurtenbach, who is head of Research for Autodesk. Autodesk Research happens to be located in downtown Toronto and is charged with looking at “how to use infinite computing to solve the world’s biggest problems.”

With such a big mandate, no wonder Kurtenbach spoke about big ideas.

He talked about the “digitization of everything,” and described a futuristic world in which design is evolving from mass production to “mass customization.”

He pointed out some of the fundamental changes already taking place.  We have virtual teams, which allow for easier collaboration. There is more focus on open source software platforms and a trend away from proprietary systems. We have 3D printing which means it’s possible to make individual objects, and there are factories where robots do most of the work. For the construction industry increased digitization translates into the potential for more prefabricated components, he said. Meanwhile smart devices and sensors establish a web of potential intelligent connectivity within buildings, among buildings and even across cities.

Most importantly, thanks to the Cloud we have “infinite computing.” Infinite computing capacity opens up almost  infinite possibilities to optimize designs to achieve the best outcome — and quickly. Kurtenbach called this “generative design.”  Instead of drawing something, he explained, you tell the computer what you want and “let the computer figure it out.” In other words, the designer inputs the desired outcome, and the computer uses algorithms to generate the best geometry for the object. The computer processes millions of options and “comes up with things that I as a designer would never have come up with  — all in the time I would have taken to draw something.”

He had one humble real-world example to show. Using the generative design process his team has designed a cabin partition for an Airbus. The support framework for the panel looks like a membrane of bones erratically arranged, but apparently the structure is very strong, very light, and has provided huge cost savings. The panel will be going into service later this year.

Then he envisaged something even more radical.  He told the audience to think of the “internet of things” as a kind of “nervous system” for things we create. The IoT’s ubiquitous network of sensors creates other possibilities.  What if the sensors on different objects and buildings all “stayed connected,” and what if those objects could respond to the environment and change their own designs “in themselves” over time?

For all his seeming enthusiasm for this digitized future of self-determining technology, Kurtenbach didn’t still wasn’t quite at ease with the possible results.

“I think this is a good thing,” he concluded.