The building that now dominates the Forks in downtown Winnipeg officially opened to wide media attention on Saturday, September 19. 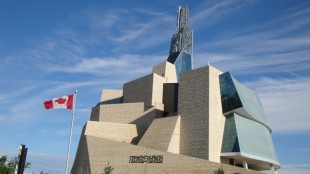 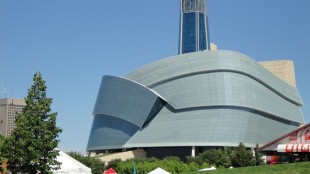 The building that now dominates the Forks in downtown Winnipeg officially opened to wide media attention on Saturday, September 19.

The Canadian Museum for Human Rights rises dramatically as a multifaceted composition of natural stone and glass. The architecture by Antoine Predock of the U.S. is inspired by natural forms such as a dove’s wings, roots, a cloud and a mountain, but the mountain image is the most obvious inspiration when the building is viewed from the Red River side. From this perspective the closed stone walls rise and step up steeply from the road to a height of 100 metres.

Around the building’s front section facing the city, huge curved glass walls fold in on themselves above the entrance.

The project was launched 11 years ago by the late Israel Asper and the Asper Foundation. However, by 2007 the federal government was involved and announced that it would be a national museum. It has contributed $100 million to the $350-million project. The rest of the funding is from private donors, as well as the province of Manitoba and the City of Winnipeg.

The exhibits in the museum have been controversial as different groups express concern about their representation. According to the Museums Act, the museum is “envisioned as a national and international destination — a centre of learning where Canadians and people from around the world can engage in discussion and commit to taking action against hate and oppression.”