The Canadian Institute of Steel Construction (CISC-ICCA) has announced the winners of the 2016 National Steel Design Awards. 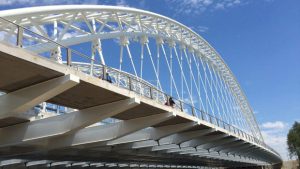 The winners are in four categories. Winner of the award for Bridges is the Strandherd-Armstrong Bridge (renamed the Vimy Memorial Bridge) which spans the Rideau River between River Road and Prince of Wales Drive in Ottawa. It is 143 metres long and arches 21 metres above the roadway with a 125-m opening. The use of steel ensured the structure’s relative lightness and enabled it to be launched across the river, resulting in environmental benefits. Owned by the City of Ottawa, the bridge was designed by Parsons (formerly Delcan), while Harbourside Engineering Consultants were the erection/construction engineers, quality assurance engineer and PSS cable specialists. Also named as recipients of the award were Horseshoe Hill Construction, Montacier, Cherubini Metal Works, Tenca Steel Detailing and Freyssinet. 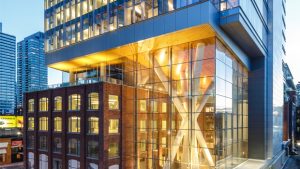 The Queen Richmond Centre in downtown Toronto won the engineering award. The complex is organized  around a large C-shaped atrium and consists of two historic buildings and an 11-storey office tower supported on a “tabletop.” The dramatic support structures for the tower are exposed in the atrium and consist of mega-delta frames that meet and “spring apart,” creating “three seamless monolithic forms.” The design team was Sweeny & Co. Architects, Stephenson Engineering as structural engineer, and Eastern Construction, Walters Group and CastConnex. Allied Properties REIT is the owner. The award citation says: “This project demonstrates how a structurally superior and innovative solution contributed to the success and elegance of a building.”   (This building won the Schreyer Award in the 2015 Canadian Consulting Engineering Awards) click here. 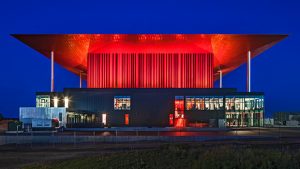 The winner of the Architectural Award is the Cogeco Amphitheatre in Trois-Rivières, Quebec. The venue is located on the St. Lawrence River, seats 3,300 indoors and has additional outdoor space. The designers describe the bold building form as follows: “Structurally, the choice of a metal structure is imposed due to volumetric singularities and spans the roof. The coveted lightness and speed of execution have been important factors in the choice of material. The structure of steel columns is exposed as a visible surface.” The building was designed by an architectural consortium of Paul Laurendeau/Francois Beauchesne, and Stantec/DPHV as structural engineers. Canam-Buildings, Genifab and Montacier were also on the winning team. 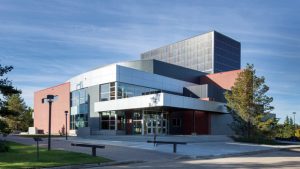 The Jeanne and Peter Lougheed Performing Arts Centre won the Sustainability Award. Located in Camrose, Alberta, the centre was built as a partnership between the city, the county of Camrose, province of Alberta, and University of Alberta. The building was designed with a focus on sustainability, collaboration between all stakeholders, and community development.  The award-winning team consists of  BR2 architects, Read Jones Christoffersen structural engineers, and Clark Builders, Whitemud IW and Canam Group.

(For an article about this building’s solar pholtaic system in CCE magazine, click here.

The national awards are given every two years and drawn from the regional winners, although selected in a separate judging process. The national awards jurors were Andy Metten, P.Eng. of Bush, Bohlman & Partners; Sean Jahanfar, P.Eng, of HDR;  Kris Mermigas, P.Eng. of the Ontario Ministry of Transportation; Gerry Lang, OAA of architectsAlliance; and Roger Pavan of Pavan Architects.