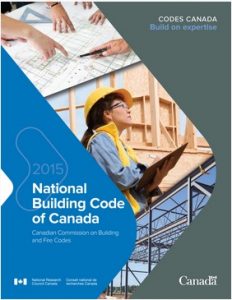 The 2015 editions of the codes “respond to the changing needs of Canadians and to new technologies, materials and research,” according to the NRC.

Among the 600 changes in the new codes, some of the most significant are:

– a provision that all buildings in Canada will now be designed for earthquake forces regardless of the level of hazard;

– higher standards for automatic sprinkler systems to allow for the construction of six-storey buildings;

The next editions in 2020 will include provisions to allow for climate change. The Government of Canada has announced it will spend an additional $40 million over five years to integrate climate resilience into building design guides and codes.

Douglas Crawford, Chair of the Canadian Commission on Building and Fire Codes, noted that the development of the new 2015 codes involved dedicated work by hundreds of volunteers, and broad consultation with stakeholders.

Canada’s national building codes were launched 75 years ago, in 1941, by the Division of Building Research.

To read a previous article about the code changes, click here.