Can buildings save the world?

Perhaps they thought they had heard it all before, but whatever the reason, engineers were thin on the ground ... 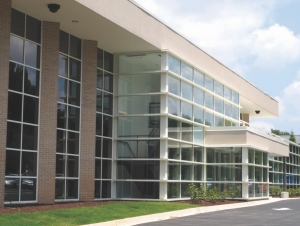 Two years ago ASHRAE renovated its headquarters in Atlanta to be a living laboratory for monitoring the performance of its installed green building technologies.

Perhaps they thought they had heard it all before, but whatever the reason, engineers were thin on the ground at a presentation by the president of ASHRAE in Toronto on March 26. Which is a shame, because what Gordon Holness had to say at the CMX-CIPHEX National Trade Show and Learning Forum is perhaps the most important thing that building engineers need to be hearing.
Holness gave a host of reasons why buildings have to become a lot more energy efficient, going so far as to suggest that building energy conservation might hold the solution for avoiding climate change and for meeting a pressing demand for energy around the world.
Why are buildings so important? “Because North American buildings consume 40% of all primary energy,” Holness said. His organization, the American Society of Heating, Refrigerating and Air-Conditioning Engineers, is an international organization of 50,000 members which sets the standard for building systems in North America and has influence around the world. It has become increasingly “green” in recent years and ultimately would like to see “net zero energy buildings,” i.e. those that “use no more energy than is provided on site by renewable resources.”
Some of the most startling reasons Holness gave for why we should take building energy cuts more seriously related to huge worldwide demographic changes, and the accompanying industrialization and burgeoning energy demand.
Currently humans on earth consume on average 200 kWh per capita per year, Holness explained.  But there’s a huge difference between the undeveloped and developed world. Europeans consume 6,000 kWh per capita per year, but North American consume 16,000 KwH per capita per year (Canada is fractionally even higher). Meanwhile, in the super-developed desert city of Dubai, each person consumes 30,000 kWh of energy per year.
The world’s population is booming. Holness pointed out that it has risen from 3 billion in 1950, to $6 billion in 1999 and is expected to be 9 billion by 2050. At present 50% of the world’s population has no access to electricity at all. We could see social unrest in the developing world as people start to desire western living standards, “And when we do, there will be a huge increase in demand for food and energy,” said Holness.
China is currently building one new coal plant every single week. In 2007, it passed the U.S. as the world’s largest emitter of carbon dioxide. India is not as industrialized as China yet, he said, but its population is booming too.
Where is the clean energy for more industrialization to come from? The U.S. has built no nuclear plants in the last 33 years, and no new dams in recent years.
Renewable energy is enjoying “lots of talk,” said Holness, but the best projections are that it will only provide 7% of needed energy in the next 20 years.
“We have to find other efficiencies,” Holness said, and these “can and do exist in existing buildings.” He believes we already have the technologies to achieve these energy savings, especially with ground source heat pumps.
But do carbon emissions really matter? Is climate change real? “I think it is real,” Holness said, noting that we are certainly seeing changing weather patterns. Atmospheric levels of carbon dioxide before 1900 and wide-scale industrialization were 180-280 parts per million (ppm), Holness said. Today the CO2 levels have risen to 380 ppm. Forecasts are that we will reach 580 ppm, and even 1000 ppm by 2050 if things don’t change. We don’t know what the long term impact of these rising emissions will be on nature, he said, “But can we afford to take the chance?”
He said that while the U.S. committed to reducing its carbon dioxide emissions by 17% by 2020 in Copenhagen, his discussions in Washington suggest that no-one has any real idea how to achieve that 17%.
But — “I think buildings are the answer,” Holness said. We simply have to learn ways of reducing their energy use. He cited a McKinsey report last year that found energy use in buildings could be reduced by 23% by 2020, with a 17% return on investment. The focus, he said, should be on introducing efficiencies in the existing building stock, and special attention should be paid to building commissioning and ongoing operations.
The western and developed countries’ current energy habits are unsustainable, Holness stressed. Our profligacy is partly cultural, and partly political and economic (the low cost of energy and politicians who have short-term goals).
While zero-energy buildings are the ultimate answer, Holness said they’re not practical for most individual buildings, but he expects to see zero-net energy communities of buildings working on “microgrids.”
In the meantime, ASHRAE is working for the energy conservation cause by making its own renovated building in Atlanta, Georgia a living laboratory for testing the latest energy-saving and renewable building technologies.
The organization is also developing standards, guidelines and other tools for designers. Holness described several, which include the recently published Standard 189.1 for the design of High-Performance, Green Buildings which ASHRAE developed with the US Green Building Council. It is a “total building sustainability package” which covers all kinds of green building parameters, including building orientation, water use and stormwater management.
The association has also recently introduced a “Building Energy Quotient” rating system, which compares the design energy consumption with the reality. It is intended as a label that can be publicly posted.

ASHRAE also has Advanced Energy Design Guides for different building types (available free, focused on buildings 2500-square metres and smaller), and it is issuing a revised energy standard 90.1 in 2010. It is developing a Net Zero Energy Guide for 2013-15.
In his conclusion, Holness paraphrased a quote from 19th-century English philosopher, John Ruskin: “When we build, let it no be for present use alone. Let it be for such work as our descendants thank us.”
See www.ashrae.org