The project is years in the making. 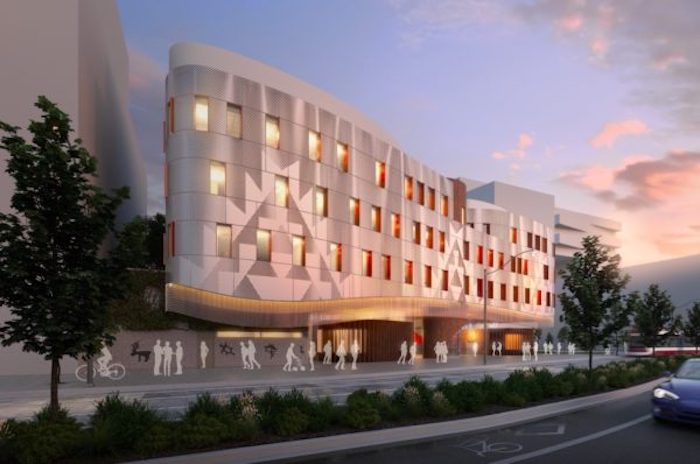 Ground was recently broken for Anishnawbe Health Toronto’s Indigenous Community Health Centre (ICHC), designed by Stantec. Construction of the four-storey, 45,000-sf facility, the centrepiece of the city’s new Indigenous Hub, is slated for completion by fall 2022.

Stantec has collaborated on the project with Indigenous-owned Two Row Architect of Ohsweken, Ont. The $33.6-million facility will unite services from three current locations under one room, so as to centralize and improve access to health care for Toronto’s Indigenous communities. A combination of Indigenous and Western approaches to health care will be complemented by social and cultural programs.

The building will be wrapped by a perforated metal façade inspired by woven shawls used in ceremonial dances. The façade will open to the east and to a four-storey atrium that will organize the centre’s clinical spaces and connect to a landscaped courtyard, where a bioswale will collect rainwater for irrigation.

Interior glass panels will display artwork and patterns reflecting Indigenous culture, while a central red staircase is inspired by ‘the red road,’ an Indigenous metaphor for making wise choices and taking the right path in life.

“It was an honour to contribute to a new and much-needed layer of Indigenous culture and presence within the urban fabric,” says Michael Moxam, project design principal and design culture practice leader for Stantec. “With an approach grounded in the land and landscape, the Indigenous Hub will be a unique experience in Toronto.”

Occupying a prominent location in Toronto’s Canary District, the ICHC is part of a master plan for the hub, designed by Stantec and BDP Quadrangle in consultation with Two Row Architect. The plan envisions residences for owners and renters, an educational facility and a day care, among other spaces.

“The project will advance the restoration of traditional medicines and green space to this block that has an industrial past, implementing new architectural guidelines for Indigenous design,” says Joe Hester, chief director of Anishnawbe Health Toronto, who has directed the project for more than 20 years.