Perhaps the most iconic building of the 21st century reached a milestone on April 30. Construction on One World Trade Centre, formerly known as the "Freedom Tower," reached a height of 1,250 feet (381 metres), making it the tallest building in...

May 1, 2012
by Canadian Consulting Engineer 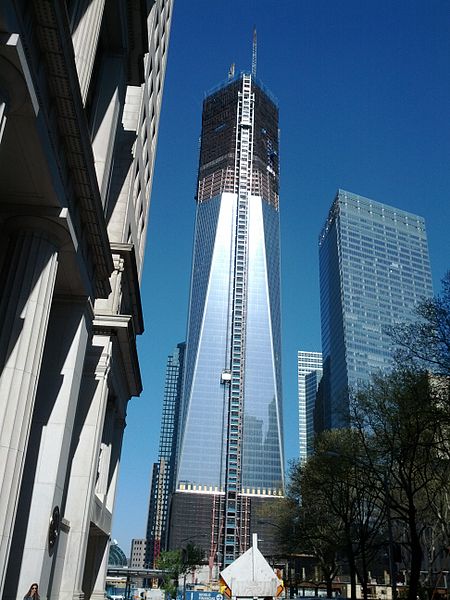 Perhaps the most iconic building of the 21st century reached a milestone on April 30. Construction on One World Trade Centre, formerly known as the “Freedom Tower,” reached a height of 1,250 feet (381 metres), making it the tallest building in New York, slightly higher than the Empire State Building.

The 1 WTC skyscraper is one of six towers planned around Ground Zero, site of the 9/11 terrorist attacks. 1-WTC is being constructed at the northwest corner of the site, where Tower 6 of the original World Trade Centre once stood.

By the time the estimated $3.8-billion new 1 WTC is completed in 2013, it will have 104 floors and will be the tallest building in the Western hemisphere. Construction began in 2006 after an original competition-winning design for as skewed tower design by architect Daniel Libeskind was abandoned. The new more traditional and symmetrical design is by architect David Childs of SOM, with WSP Cantor Seinuk as structural engineer and Tishman as main contractor.

The tower rises from a windowless concrete “bunker” base designed to protect against terrorists. At the 20th floor it begins to taper with an octagonal floorplan, rising to a spire at the top that will reach 1,776 feet – symbolically referencing the year of American Independence.

According to Wikipedia, when the floor plans for 1 WTC were published on a New York City Department of Finance website, it created an uproar, with people warning that the plans could be used to launch another terrorist attack.

Meanwhile, across the Atlantic, Europe’s tallest inhabited building is under construction and reached its top height – 1,016 feet (310 m) – at the end of March when a steel spire weighing 500 tonnes was lifted into place. “The Shard” near to London Bridge in Southwark is designed by Italian architect Renzo Piano.

In Azerbaijan in the former Soviet Union, grand plans are afoot to build a tower that will be taller even than the Burj Khalifa in Dubai, the current tallest building in the world at 850 metres. The tentatively named Azerbaijan Tower will be 1,050 metres high and will incorporate 41 islands in the Caspian Sea. It will have 150 connecting bridges, a Formula One race track, and be home to a million estimated residents when it is completed in 2025.