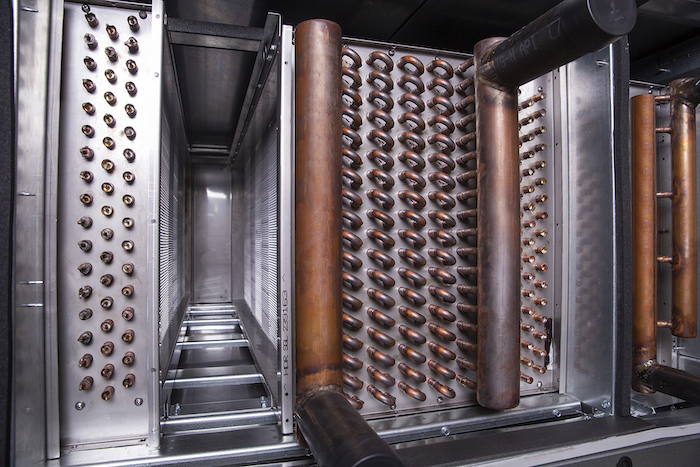 Last week’s three-day AHR Expo at the Orange County Convention Center in Orlando, Fla., drew more than 50,000 attendees, from more than 160 countries, to check out 506,090 sf of heating, ventilation, air-conditioning and refrigeration (HVAC+R) products from more than 1,900 companies, including 295 first-time exhibitors.

Coinciding with the final three days of ASHRAE’s five-day Winter Conference at the nearby Hilton Orlando, the AHR Expo attracted a mix of engineers, contractors, architects, other building industry professionals and students. As ASHRAE celebrates its 125th anniversary with sessions chronicling the evolution of energy modelling, big data and smart controls, AHR exhibitors showcased a wide variety of tools for improving building operations.

Johnson Controls started the expo’s first day with an executive panel discussion addressing changes in customer demand. Having grown through acquisitions, the company reportedly invests US$600 to US$700 million annually in new product development, with the primary focus of reducing buildings’ energy consumption by 20% to 50%. Examples of this technology on display included increasingly efficient commercial rooftop units (RTUs), heat pumps, building automation systems (BASs) and air handlers, along with a new web-based HVAC design tool for engineers.

Bradford White exhibited MagnaTherm boilers from its Laars Heating Systems business, which can help maintain efficiency for hotels, schools, hospitals and high-rise office towers by using a feedback system to optimize their state of combustion.

Samsung featured the second generation of its Wind-Free technology, which uses still air to cool a space without the discomfort of direct airflow. Models include one- and four-way cassettes for light commercial and commercial buildings, where motion detection sensors can adjust operations in line with occupancy levels.

“You can get creative with it for specialized applications,” said marketing director Blake Wynter. “You’re not tied to one design. You can configure different zones.”

Danfoss opened the expo’s second day with a briefing addressing changes affecting the HVAC+R industry, from new refrigerant regulations and efficiency standards to trends like electrification and digitalization. By way of example, the company foresees a growing role for electric heat pump technology in reducing emissions, minimizing carbon footprints and decreasing energy costs in commercial applications.

Armstrong launched its Opti-Point platform, which creates a digital twin of a mechanical system and learns about its operating characteristics to help reduce energy consumption and address performance degradation over time through predictive diagnostics and condition-based maintenance (CBM).

Emerson showcased ASCO gas valves and motorized actuators for burner-boiler applications, which offer a new combustion shutoff option to increase safety and reliability while enhancing flow (the company claims it’s the highest rate on the market) and control.