This proposal demonstrates an ability to achieve a net zero target, and the implementation of a progressive wellness standard for the workforce occupying the facility. 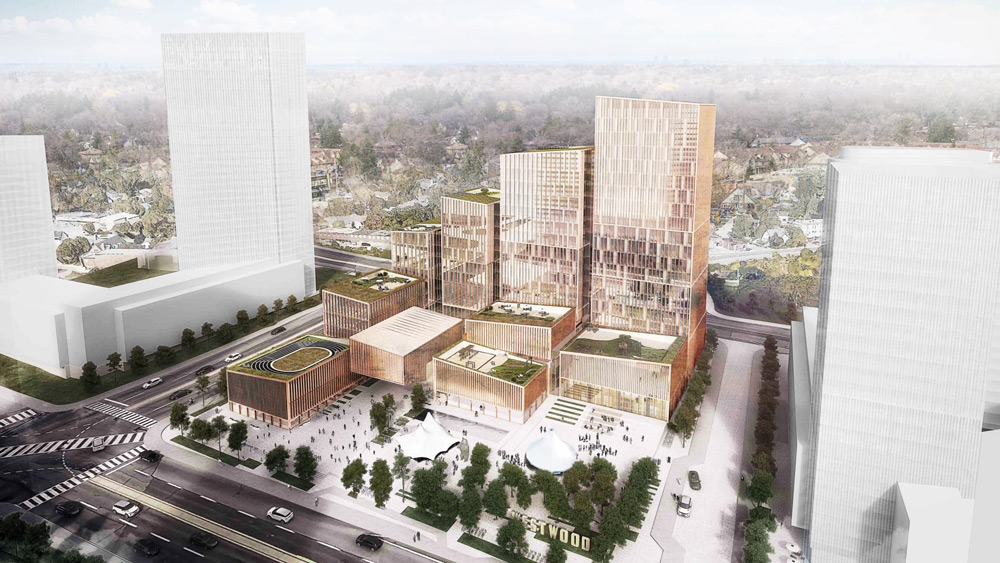 The winning design, developed by a partnership of architects from Toronto and Copenhagen, best satisfied the guiding principles established in the Request for Proposals, showing flexibility and an iconic design well suited for the community.

“On behalf of the jury, I would like to acknowledge all participating design teams and thank them for their considerable efforts in interpreting the competition brief and presenting thoughtful solutions for the integration of office, community hub and civic space. The calibre of submissions in this competition was remarkable,” said Gordon Stratford, Senior Vice President and Design Principal, HOK and the Jury Chair of the Etobicoke Civic Centre Design Competition.

The five-member jury made the recommendation for this proposal based on its ability to meet four key concepts:

• Environmental sustainability – This proposal demonstrates an ability to achieve a net zero target, and the implementation of a progressive wellness standard for the future workforce occupying the new facility.

• Flexibility – The design of interior and exterior public spaces and related programs enables a broad range and size of community activities. As well, the proposed office floor plate offers the greatest flexibility in support of achieving the City’s office modernization program.

• Community identity – This design builds its story upon the context and diversity of Etobicoke, creating an animated visual signature of “a place of many homes” that is both welcoming and dynamic. The resulting integrity of design concept will frame future neighbourhood growth with its distinctive landmark presence.

• Pedestrian scale – The design has sculpted a large program into a context-sensitive cascade of articulated smaller built forms and spaces, resulting in an inviting interior and exterior pedestrian scale and animated street presence. This approach also enables ease of phasing development over time. As well. the landscape architecture’s promise of a spectrum of public outdoor activity spaces has the potential to infuse the poetic yet pragmatic building design story throughout the site.

Four shortlisted design teams publicly presented their designs on Tuesday, April 25 to more than 140 community members, councillors, City staff and the project teams in the council chamber at the existing Etobicoke Civic Centre. Following the submission of community comments, the designs were then judged the following day by the jury.

With the completion of the design competition, following City Council direction, Build Toronto will undertake a business case analysis that will closely examine the merits of a new build versus ongoing maintenance and operation of the existing civic centre. The business case will be presented to Council in fall 2017.