$11-billion project has huge potential for generating business for consulting engineers, but road ahead is not clear yet. 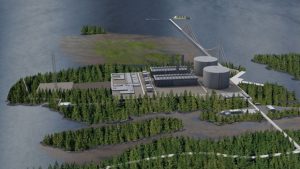 The Canadian government has approved the $11-billion Pacific NorthWest LNG project — a project with huge potential for generating business for consulting engineers in British Columbia. The government says it represents an investment of up to $36 billion when accounting for upstream natural gas development.

The natural gas liquefaction and export facility is planned for Lelu Island along B.C.’s northern coast. It lies within the District of Port Edward on land administered by the Prince Rupert Port Authority. The gas would be produced by Progress Energy Canada in northeast B.C.

The project was approved according to the federal government’s Interim Principles for project assessments that were announced in the Speech from the Throne in January. Those principles were meant to restore the public’s trust in the environmental review process and provide greater certainty to project proponents. The principles said, for example, that decisions on whether projects can proceed would be “based on science, traditional knowledge of Indigenous peoples and other relevant evidence.”

The approval of the Lelu Island plant comes with over 190 legally binding conditions to reduce the massive project’s environmental impacts on fish, fish habitat, marine mammals, wetlands, migratory birds, and human health. The government also says that there will be a rigorous regime to monitor compliance with these conditions by both federal and provincial representatives. They will have the authority to stop project activities that do not comply with the conditions.

Petronas, the Malaysian company that owns the majority of Pacific Northwest LNG, said it was reviewing its options in light of the imposed environmental conditions. If it does go ahead, the construction is expected to take five years.

According to the government’s press release: “Support for the project focused on the project’s economic impact and job creation. This valuable public input was carefully reviewed, considered, documented and taken into account in the development of the environmental report and conditions. Some communities expressed concern about the impact of increased marine shipping. Our government is committed to strengthening the marine safety regime.”

In an article about the approval, Zoe Thoms of Aird & Berlis,  notes that environmental groups have concerns and that support for the project among First Nations in the region is mixed. “Pacific NorthWest LNG has consulted with five Tsimshian First Nations who each have traditional claims to the area where the facility is to be built. Term sheets intended to lead to impact benefit agreements have been concluded with four of the nations … [but] the project may still face legal challenges from First Nations groups who are concerned about impacts to salmon habitat and traditional fisheries both from the facility and along the pipeline route that would deliver the natural gas for processing.”

Catherine McKenna, Minister of Environment and Climate Change, said: “The only way to get resources to market in the twenty-first century is if they can be done in a responsible and sustainable manner. This decision reflects this objective.  With the legally binding conditions we are putting in place and with British Columbia’s commitment to increase its price on carbon in line with the Pan Canadian Framework, I am confident that we will minimize the environmental impacts of the project and ensure that it proceeds in the most sustainable manner possible.”

To read about the Canadian governments “Interim Principles” for environmental approval of projects, click  here.

To read the September 30 article by Zoe Thoms of Aird & Berlis, click here.

To read a September 29 CBC analysis of the project’s future prospects of actually starting, click here.